I got a M8043 board in excellent condition from Camiel V. today. Should be possible to use this to connect a serial console to the cadmus box. Of course I have to find out the correct jumper settings first. 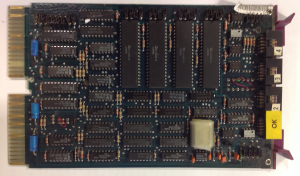 The first machines manufactured by PCS were PDP11 clones. And in order to improve these clones PCS developped a CPU-board that was using a Motorola 680×0 processor instead of the LSI11. But the remaining parts were kept. In particular the bus in a cadmus box is a 9-slot QBUS. And most I/O-cards are identical to those used in PDP11’s.

Accorindg to cadmus-documentaion the serial I/O-board in a Cadmus is a DLV11-J (DEC part number M8043). Most likely I can replace the missing serial boards with such a DEC board. 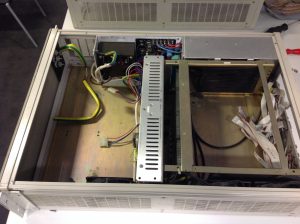 Finally I had some time to have a closer look at the cadmus boxes. It was a frustrating experiance since most of them are empty.

Originally my plan was to build one running system from these boxes. But now it’s not clear wether that will be possible or not. Seems like I got three different types of boxes:

CPU-boxes: in contrast to the other boxes these have a keylock and three lamps. There’s a power supply in the middle of this kind of box.. In the front part there is space for a 5.25 disk and a 5.25 floppy drive. In the rear there is a 9 slot card cage. I got three of these boxes. One is copletely empty, i.e. it contains just a power supply, no disk, no floppy and an empty card cage. The other two boxes contain both a floppy and a disk, but in one box they are just lieing in the box without being connecting. I found some documention about cadmus boxes according to which the CPU-board had to be plugged into the first, uppermost slot. Unfortuneately only one box has such a CPU-board and all other boards look like memory-boards. No board has a serial line connector.

Extension-boxes: I got two of these. They look like the CPU-boxes. Same power supply at same position but no possibilites to mount anything in the front part. Same card cage in the rear, but unfortunately all boards were removed in both boxes. Just 8 connectors for serial line, one connector for a parallel line and a connector labelled “network”, all in the back of the box.

Storage-boxes: Again I got two of these boxes. They contain a big hard disk and a QIC tape drive. In one box the mechanics of the tape drive were removed. It’s not clear how this boxes were connected with the CPU-boxes.

So my impression is: A single Cadmus-system consisted of three boxes, a CPU-box with boot-disk, boot-floppy, CPU-board and memory-boards, another box with I/O-boards and an optional storage-box. To run such a system at least one serial I/O-board is needed and I have none of them. But I have plenty of power supplies.

In order to test the only CPU-board I have to get a serial I/O-board first.

Andreas S. was in Düsseldorf today and brought the 7 Cadmus-Boxes. Unfortunately no time so far to inspect them.